DURHAM, N.C. – Scientists at Duke University and the University of Rochester Medical Center (URMC) have received a $2.49 million grant to study air pollution’s impacts on fetal development and birth weight. 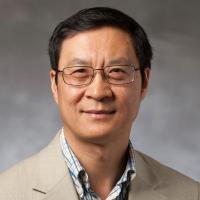 Junfeng “Jim” Zhang, professor of global and environmental health at Duke, and David Rich, associate professor of public health sciences at URMC, will lead the research, which will be conducted in Beijing by a team of U.S. and Chinese scientists. Funding comes from the National Institute of Environmental Health Sciences (NIEHS).

By following 660 expectant Chinese mothers from early pregnancy through delivery, the researchers hope to identify how prenatal exposure to air pollution triggers biological mechanisms that lead to lower birth weights and higher risks of hypertension, coronary heart disease and other chronic conditions later in life.

Scientists from the Beijing Obstetrics and Gynecology Hospital and the Chinese Research Academy of Environmental Sciences will collaborate with Zhang and Rich’s teams on the research.

The new study builds upon earlier research conducted by Rich, Zhang and their team during the Beijing Summer Olympics in 2008. That study looked at birth weights of children from mothers whose late-term pregnancy coincided with the Chinese government’s extraordinary efforts to reduce air pollution during the Games. It found that these newborns were, on average, 23 grams heavier than those born before and after the games when the air pollution levels were much higher.

Scientists have long suspected that exposure to air pollution during pregnancy may trigger inflammation that impairs placental development and the delivery of nutrition to the fetus, but they have been unable to pinpoint the precise biological mechanisms responsible.

Zhang hopes the new study will provide guidance. “Our goal is to measure biomarkers of inflammation and oxidative stress, placental growth, changes in gene function, and metabolic dysfunction, and evaluate whether exposure to air pollution affects these mechanisms,” he says.

To do that, the researchers will measure pollutant levels in blood and urine samples collected from the women at multiple times during their pregnancies, as well as in cord blood and placental tissue collected at birth. Measurements of ambient air pollution level in Beijing will be collected at the same times.

Collaborators on the study include Richard K. Miller, Sally Thurston and Timothy Stevens of URMC; Susan Murphy of Duke; Kaibo Liu of Capital Medical University and the Beijing Obstetrics and Gynecology Hospital; and Jinliang Zhang and Zhipeng Bai of the Chinese Research Academy of Environmental Sciences.