An MP combines the academic rigor of a thesis with the practical experience of an internship. Working singly or in groups, students apply skills and knowledge they’ve acquired in the classroom to tackle real-world environmental challenges for real clients through a well-formulated and defensible analysis. It is a culminating experience for\all Master of Environmental Management (MEM) and Master of Forestry (MF) students at the Nicholas School of the Environment.

Duke Environment recently corresponded with Geschke, who is pursuing her MEM in Ecosystem Science and Conservation, to discuss the goals and key findings of her MP as well as how the findings could aid further research and conservation efforts.

What is the goal of your MP?

“My client was Duke Forest. They were interested in getting a better idea of where different species of salamander were likely to be present in each forest division so they could identify areas for on-the-ground salamander surveys and locate habitats that need to be managed in salamander-friendly ways.

“Additionally, there were concerns about salamander mortalities during breeding season, when large numbers of them cross roads at night going to and from ponds where they lay their eggs.

“To address this, I conducted a pond connectivity analysis to see which sets of ponds were within the average 500m dispersal distance of a salamander and identify landscape corridors where adults or juveniles might be moving. This gives a better sense of where separate populations of each species might be present and where they might be crossing Duke Forest gravel roads or paved city roads that cross through an identified corridor.”

What challenges did you encounter with your work?

“Because my project was done entirely in GIS, it didn't involve any field work to collect salamander occurrence points or ground-truth my models. Instead, I collected more than 500 salamander occurrence points from various sources such as citizen science websites, Duke Forest records and the North Carolina Museum of Natural Sciences. For some species, however, I only received three or four data points while for others I had more than 100. This necessitated the use of different modeling approaches for different species.

“Another challenge was that salamanders are really microhabitat specialists but the habitat characteristics that are important to them – like hydroperiod of wetlands, or the amount of downed woody debris – aren't available as GIS datasets and therefore are impossible to model. So I had to use a landscape-scale approach that may over-generalize its findings a bit but is still an important first step to help narrow down where to look for and manage each species. Duke Forest will be using the outputs of my project to do this.”

What are the key findings of your MP?

“My MP resulted in maps of predicted habitat for eleven different species of salamander, for both the Duke Forest and for Durham and Orange counties.

“When I compared the habitat quality scores of the landscape to where the salamanders were actually observed, I found that many salamanders aren't currently living in the "very best" habitat that exists. This could be due to biases in sampling - maybe no one happened to find and record salamanders in these best areas, or maybe they aren't open to the public - or it could be an effect of habitat fragmentation.

“When patches of habitat got separated by roads or development, smaller populations of salamanders in good habitat may have been extirpated. I also used historic salamander data points from the NC Museum of Natural Sciences ranging from the 1930s to 1990s and overlaid these on my habitat maps. In some cases, they align with areas that are still good habitat today, but in other areas, the salamanders were observed in places that aren't good habitat anymore, indicating that land use change over time may have led to loss of habitat in these areas.

“As for the pond connectivity, I found that corridors between ponds exist in every Duke Forest division. A city road crosses at least one pond corridor near every division, and Duke Forest gravel roads cross pond corridors in three divisions, highlighting areas where road mortality mitigation strategies could be employed.”

Are any salamander species in Durham and Orange counties facing marked drops in population due to diminished habitat or connectivity?

“Compared to the mountainous region of North Carolina such as Asheville or Great Smoky Mountains National Park, salamanders in the Piedmont region are often overlooked and understudied. This was one reason why I thought it was important to expand the scope of my project from the Duke Forest to Durham and Orange counties. Having an idea of where salamander populations currently exist and where the best remaining habitat is will allow for more educated land conservation and management decisions.

“One study in particular I came across in my research found that populations of Southern two-lined salamander (Eurycea cirrigera) and Northern dusky salamander (Desmognathus fuscus) in the Piedmont region were found to have declined 20% to 44% in just three decades, associated with the conversion of forest to developed land (Price et al. 2006).

“Impacts might be more severe on stream-associated species like these, though it's likely that all species of salamander are being affected by the rapid growth of the region. For example, two of the species in my project, red and mud salamanders (Pseudotriton ruber and Pseudotriton montanus) haven't been seen in the Duke Forest in decades, even though a Duke PhD thesis I found from 1968 recorded 114 red salamanders and 77 mud salamanders in the forest!

“The North Carolina Wildlife Resources Commission has listed many of the species included in my project as “knowledge gap priority species” that warrant future monitoring and research, and one in particular (the four-toed salamander, Hemidactylium scutatum) is a species of Greatest Conservation Need in North Carolina.” 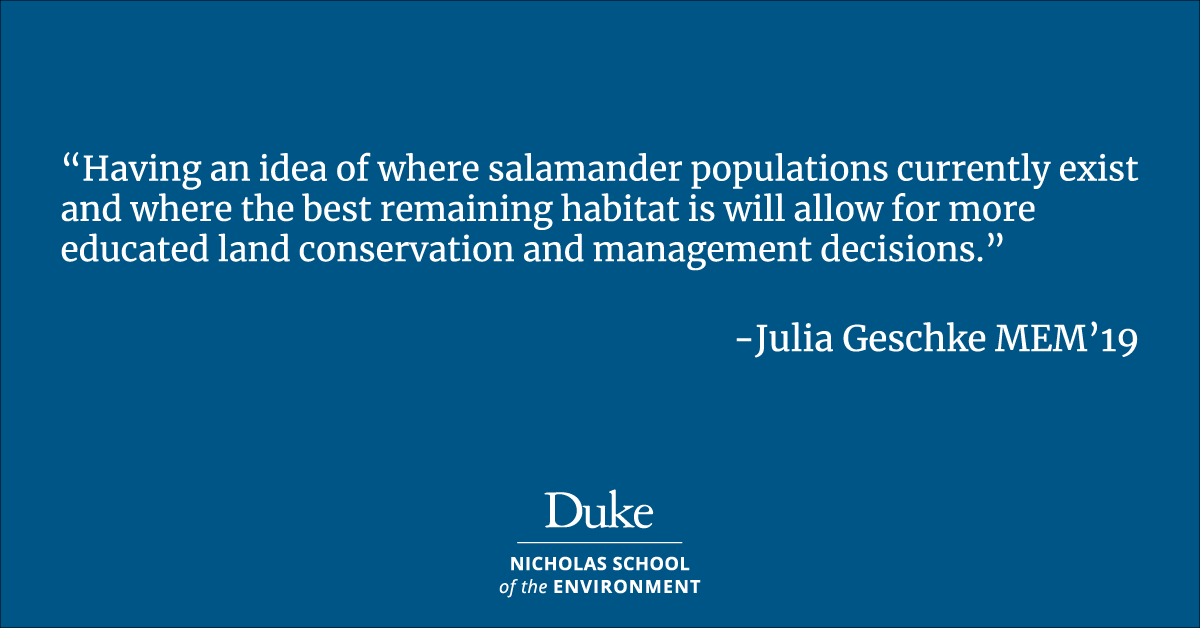 Are your findings a model or baseline that could be adopted in other counties with similar species initiatives?

“Yes! The habitat models I created will be a baseline for further research and on-the-ground surveys for each species in the Duke Forest and throughout Durham and Orange counties.

“I used two main approaches for predicting habitat – rule-based modeling, which can be used when species occurrence points are lacking but you know a lot about which habitat characteristics are important for each species, and Maxent modeling, which can be used when you do have a lot of occurrence points for your species. Both require GIS data, so if other counties collected the same types of GIS data that covered their county, they could use the scoring system I developed or use salamander occurrence points from their county in Maxent and develop similar habitat maps.

“The pond connectivity method I used was based on a paper by Matisziw et al. (2015) and I wrote a script in Python that follows their approach. The script can be used by anyone as long as they have a dataset of ponds and wetlands and know the typical dispersal distance of the species they’re modeling connectivity for.”