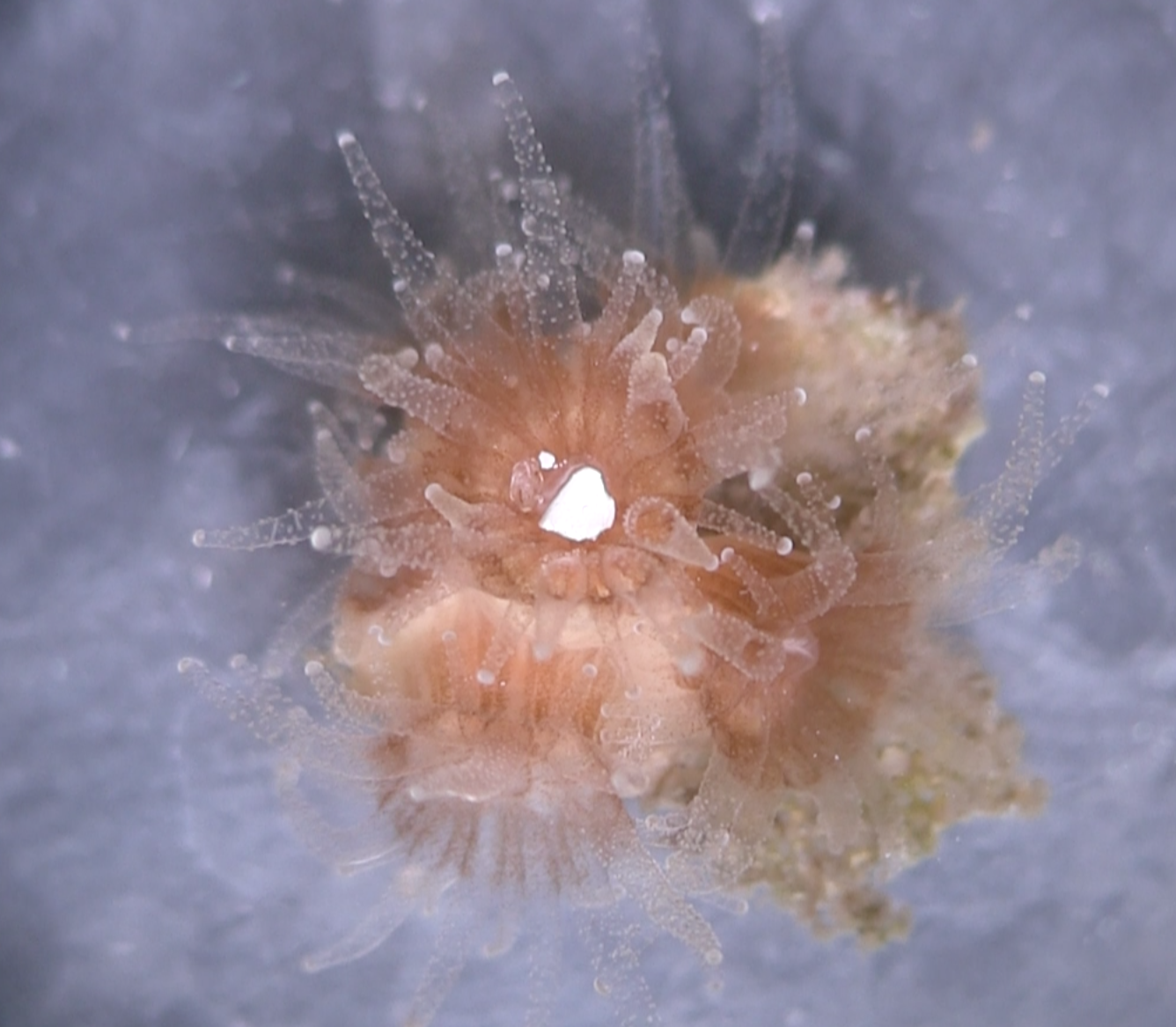 A white fleck of plastic is engulfed by a coral polyp. (Credit: Alex Seymour, Duke Univ.)

Note: Austin Allen is available for additional comment at 540-729-2620 or austin.allen@duke.edu. Alex Seymour is available at 818-642-2161 or alexander.c.seymour@duke.edu.
A video of a coral polyp ingesting a plastic particle can be viewed here.

But a new Duke University study of plastic ingestion by corals suggests there may be an additional reason for the potentially harmful behavior. Visual cues, such as a resemblance to prey, don’t factor into the appeal, the researchers noted, because corals have no eyes.

“Corals in our experiments ate all types of plastics but preferred unfouled microplastics by a threefold difference over microplastics covered in bacteria,” said Austin S. Allen, a PhD student at Duke’s Nicholas School of the Environment. “This suggests the plastic itself contains something that makes it tasty.”

“When plastic comes from the factory, it has hundreds of chemical additives on it. Any one of these chemicals or a combination of them could be acting as a stimulant that makes plastic appealing to corals,” said Alexander C. Seymour, a geographic information systems analyst at Duke’s Marine Robotics and Remote Sensing Center, who co-led the study with Allen.

Further research will be needed to identify the specific additives that make the plastic so tasty to corals and determine if the same chemicals act as feeding stimulants to other marine species.

Allen and Seymour’s peer-reviewed study was published Oct. 23 in the online edition of journal Marine Pollution Bulletin. You can access it free of charge through Dec. 10 by clicking here.

Microplastics, tiny pieces of weathered plastic less than 5 millimeters in diameter, began accumulating in the oceans four decades ago and are now ubiquitous in the marine environment. They pose a major threat to foraging sea animals, including many species of birds, turtles, fish, marine mammals and invertebrates.

Because plastic is largely indigestible, it can lead to intestinal blockages, create a false sense of fullness or reduce energy reserves in animals that consume it. “About eight percent of the plastic that coral polyps in our study ingested was still stuck in their guts after 24 hours,” said Allen.

It can also leach hundreds of chemical compounds into their bodies and the surrounding environment. The biological effects of most of these compounds are still unknown, but some, such as phthalates, are confirmed environmental estrogens and androgens – hormones that affect sex determination.

Allen and Seymour conducted their two-part study using corals collected from waters off the North Carolina coast. In their first experiment, they offered small amounts of eight different types of microplastics to the corals to see if the animals would eat the bite-sized bits versus other similarly sized items offered to them, such as clean sand.

“We found that the corals ate all of the plastic types we offered and mostly ignored sand,” Allen said.

In the second experiment, they put groups of coral into separate feeding chambers. Each group was offered the same amount of “food” -- weathered plastics -- for a 30-minute period, but some groups got only particles of unfouled microplastics while others got only particles of weathered microplastics fouled with a bacterial biofilm. This experiment verified that the corals would eat both types of plastic, but preferred the clean type by a three-to-one margin.

The researchers hope their findings will encourage scientists to explore the role taste plays in determining why marine organisms ingest microplastics.