When Tom Schultz learned about the Duke Campus Farm, a working farm in Duke Forest where students can volunteer to plant and harvest sustainably grown produce, an idea grew.

“Students get really excited about going out there and getting their hands in the dirt, and I thought ‘that’s a pretty cool concept,’” said the assistant professor of the practice of Marine Molecular Conservation. “I started thinking 'what would that look like at the Marine Lab?’”

The answer was aquaculture. And that’s how the Duke Aquafarm got its start.

Located in Atlantic Beach, N.C., a 15-minute boat ride from the Duke Marine Lab, the aqua farm offers students the opportunity to get hands-on, feet-in-the-mud experience with oyster farming.

“Experiential learning is an extremely powerful tool,” said Schultz. “This is a great experience for the students and a really fun one.”

Students can sign up for weekly trips to the aquafarm. Once they jump into the water, the volunteers cull through and divide oyster bags, flip over the mesh bags and clean off organisms growing on the equipment.

D’amy Steward, an undergrad who volunteered at Duke Aquafarm while spending last fall at the Marine Lab, said she enjoyed being involved in all aspects of the project—from helping put out the initial 30,000 baby oysters, known as spat, when the farm started operating last August, to measuring and tracking their growth.

“I went out about as often as I could,” said Steward, a biology and environmental sciences major. “It’s just so fun to go out there, being in the water and having the opportunity to learn a new skill. I loved it.”

Although Schultz knew the habitat near the Marine Lab was well primed for shellfish farming, he admits that he didn’t know where to start.

In 2017, he approached James Morris, a marine ecologist with NOAA’s National Centers for Coastal Ocean Science and a second-generation aquaculture farmer, looking for some advice. Morris loved the idea and agreed to collaborate on the project.

“There’s a lot of knowledge that goes into it that he was willing to share with me,” said Schultz. “If I didn’t have that support, it would’ve been a really different process.”

Despite the farm’s educational purpose, Schultz had to secure a commercial lease from the N.C. Division of Marine Fisheries to operate it.

Morris was instrumental in helping Schultz navigate through the logistics, including finding a good site for the oyster farm—a one-acre plot adjacent to property near Fort Macon donated to the Duke Marine Lab in 1998. 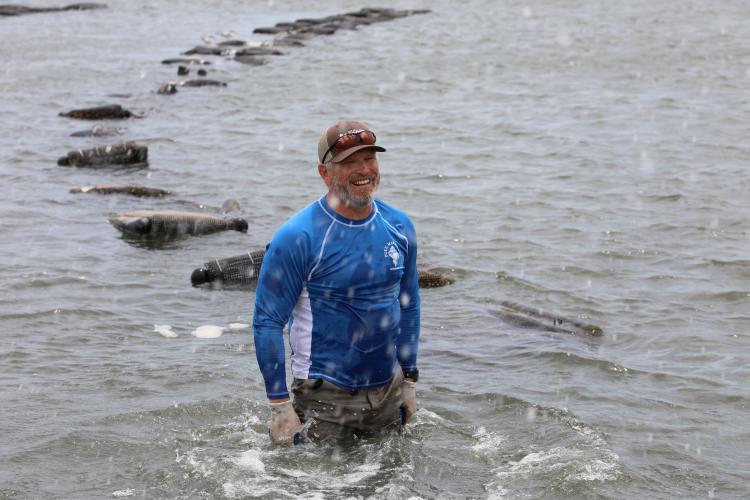 “That’s really the key to getting the lease from the state,” said Schultz. “Picking a site that’s appropriate, where there’s not a ton of boat traffic and you’re not excluding the public from an area that they normally have access to.”

The lease got state approval in January 2018. Schultz then started to learn more about what went into building the farm—including how to set up and secure the equipment.

Duke Aquafarm started out with 10 oyster bags last year, but had grown to nearly 100 bags this summer, when Schultz and volunteers put out an additional 40,000 oyster spat.

Although Schultz doesn’t plan to do aquaculture research, seeing the varying oyster growth rates caught his attention. Schultz, the director of Duke’s Marine Conservation Molecular Facility, is interested in having his lab conduct genetic testing in hopes of identifying markers that may help explain size differences.

Other Marine Lab researchers have shown interest in conducting studies at the aquafarm—including measuring the impact on water quality the oysters are having, as well as looking into other benefits of shellfish aquaculture for coastal environments.

Schultz hopes to secure funding to build infrastructure on adjacent Duke-owned property, including a dock to facilitate access from land.He also wants to host oyster roast fundraisers to support the farm and local charities.

That got a step closer in June, when the Duke Aquafarm was granted a certificate to harvest the oysters and bring them back to the Marine Lab’s dining hall, where they can be cooked or stored. 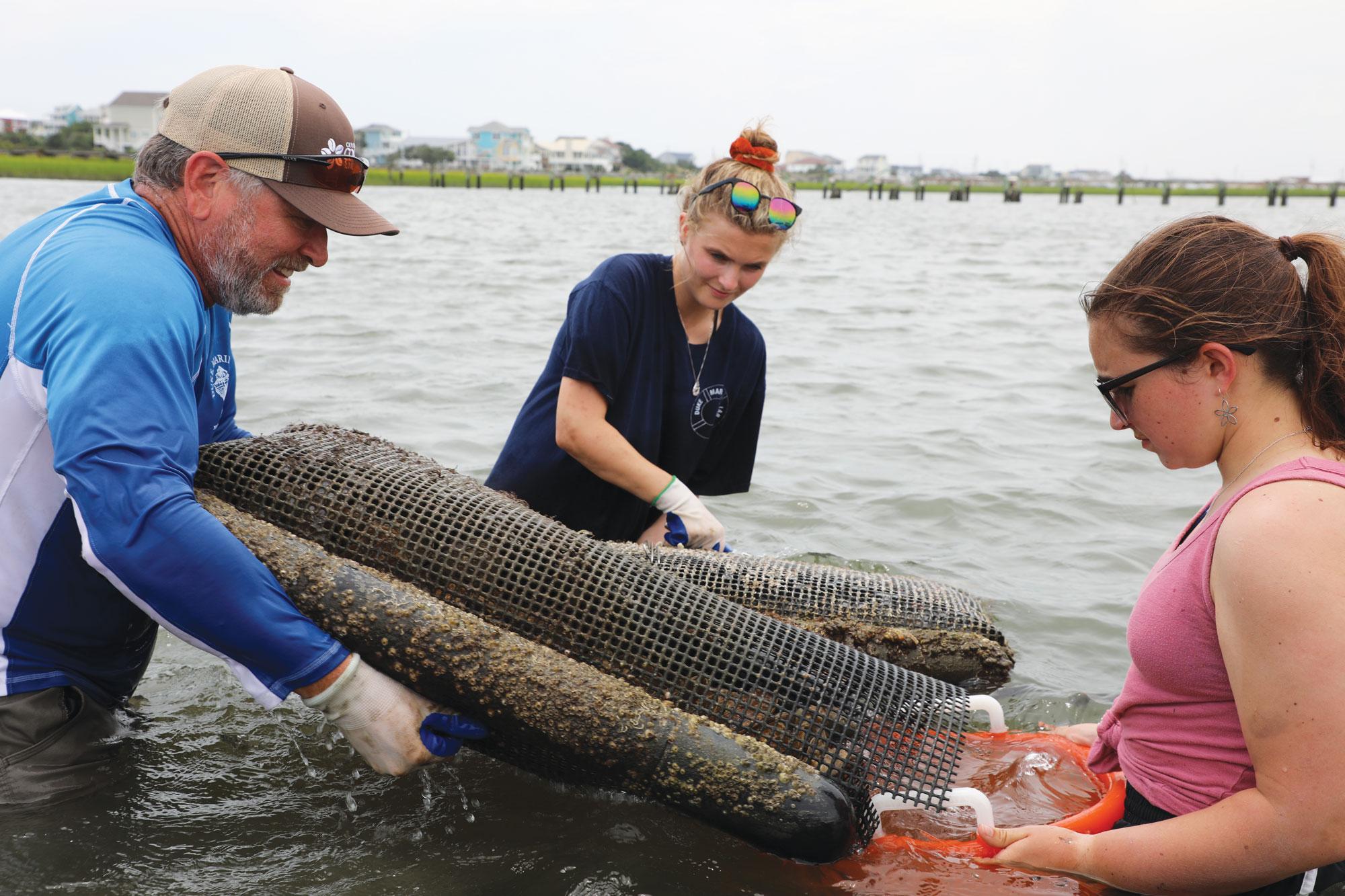 Ultimately, Schultz said he hopes students get a better sense of where their food comes from and what it means to grow it, especially on a smaller scale, from working on the aquafarm.

“It’s about them having that experience,” he said. “That’s what is important—learning that environmental ethic of growing your own food and having a connection to what you’re eating.”

After her experience at the Duke Aquafarm, Steward said she’s looking into volunteering at Duke Campus Farm now that’s she’s back in Durham.

“It’s unique to see how easy it is to be able to grow your own food,” the senior said, adding that she hopes to continue doing so in the future.

“It’s such a viable option that we all need to consider moving forward as the world continues to change.” 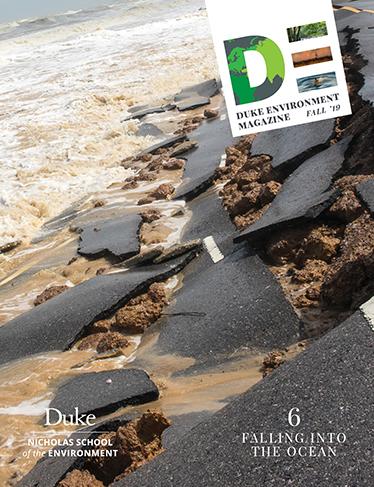 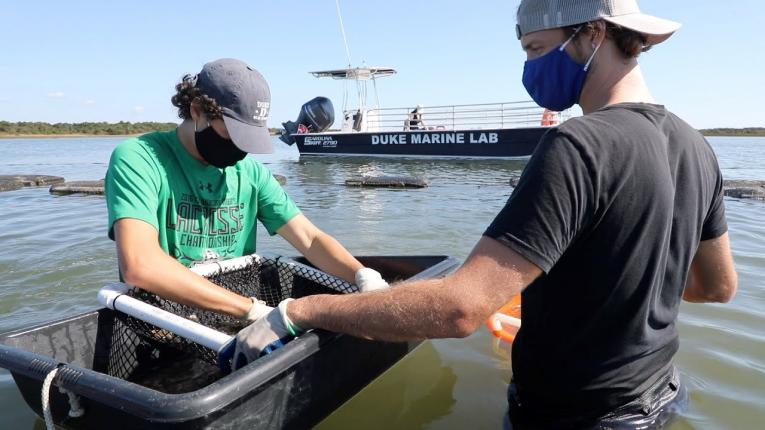 The Duke Aquafarm is Duke’s other “campus farm,” where students grow oysters instead of produce and learn how the tasty bivalves could help take a bite out of coastal pollution.

Under the guidance of professor Tom Schultz, student volunteers learn how to clean and flip the floating bags, and care for the oysters to encourage healthy growth.