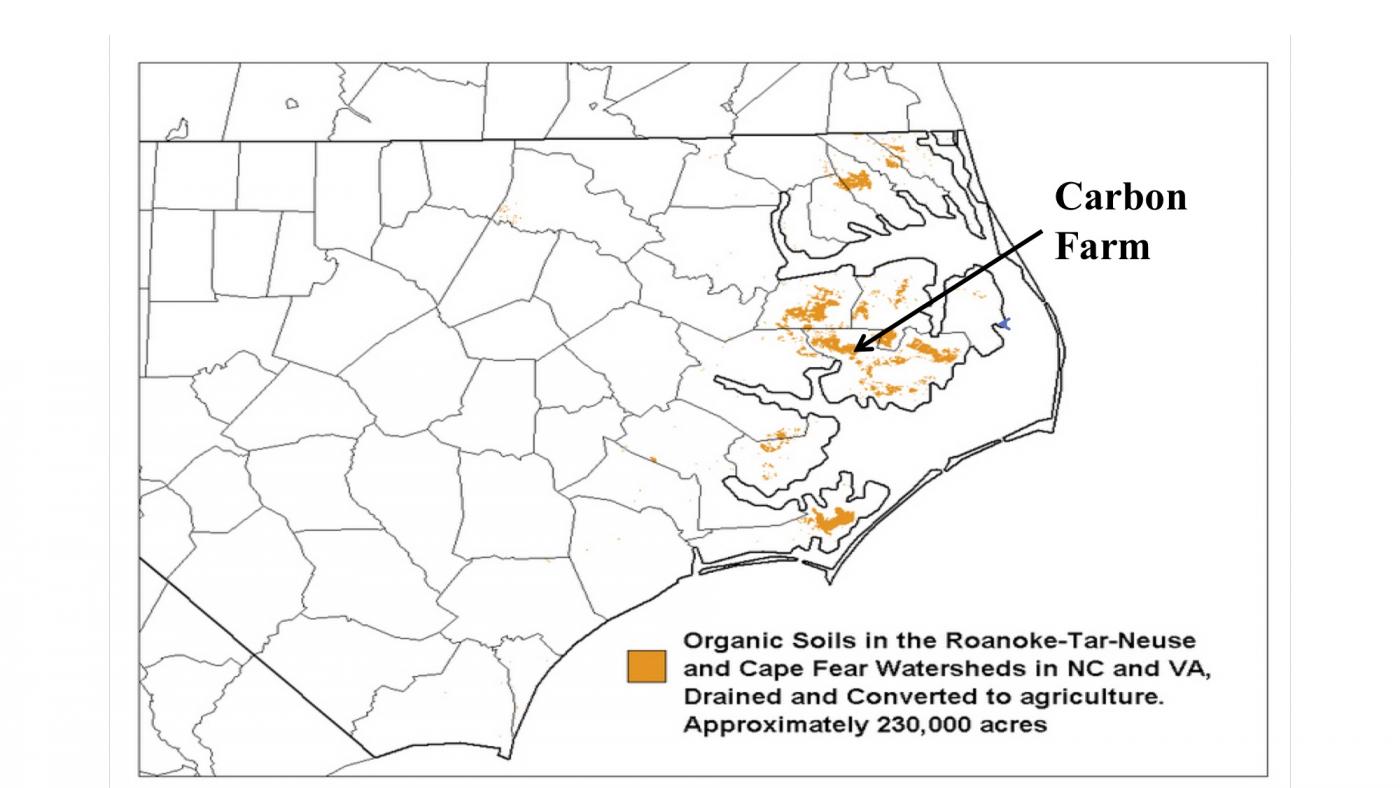 The new carbon farm is located on coastal wetlands that formerly were drained for farming and forestry. (Credit: Duke Univ.)

When fully operational, the farm -- located in Hyde County on a tract of pocosin peatlands formerly drained for agriculture -- could potentially store enough carbon to offset much of the university’s carbon emissions and help Duke meet its goal of achieving carbon neutrality by 2024. Offset credits not used by the university could be sold to others.

Carbon farming is a new approach for fighting global warming that uses enhanced land management and conservation practices to increase the amount of carbon that current or former agricultural lands pull out of the air and lock away in their soil and vegetation.

“By rewetting and reverting these former peatlands to their natural wetland state, we can significantly increase their capacity for long-term carbon storage,” said Curtis J. Richardson, director of the Duke University Wetland Center, who spearheaded efforts to broker the deal with the landowner, Hyde County Partners LLC, and will direct the restoration and management of the 10,000 acres for carbon storage.

The freshwater marshland will also protect local groundwater supplies and provide wildlife habitat as side benefits.

“This is a tremendous opportunity for the state of North Carolina, Duke University and the private landowner to create the largest carbon farm in the eastern United States, maybe the entire country,” Richardson said.

Researchers recently began a two-year pilot program on 300 acres of the land to identify the best ways to restore the former farm fields to their original wetland state and measure and verify how much carbon their saturated peat soil can store. If enough carbon credits can be generated at a cost-effective rate, production will then expand to the other 9,700 acres.

Carbon farming programs already under way in Australia, New Zealand, Europe, Canada, California and the Midwest have shown that a 2.5-acre plot of working rangeland or pasture can store more than one metric ton of carbon annually.

Recent studies indicate that Southeastern pocosin peatlands, such as those found in Hyde County, have much greater potential.

“A five-year study we did at Pocosin Lakes National Wildlife Refuge in nearby Tyrrell County showed that these peatlands have some of the highest net carbon credit values ever recorded,” said Richardson, who holds a faculty appointment as John O. Blackburn Distinguished Professor of Resource Ecology at Duke’s Nicholas School of the Environment.
“When restored to their natural state as shrub-dominated bog wetlands, they can potentially store 10 to 15 times more metric tons of carbon per year than drained or unrestored agricultural lands,” he said.

“Left undisturbed, carbon in pocosins can remain stored for millennia due to the unique natural antimicrobial compounds that prevent the waterlogged peat from rapidly decaying and releasing the carbon back into the atmosphere,” Richardson said. “The presence of these compounds acts as a protective mechanism or latch -- greatly reducing the release of greenhouse gases, even during periods of drought.”

In 2017, Duke University generated about 258,000 metric tons of carbon emissions. If carbon storage rates at the new 10,000-acre farm are similar to those recorded at Pocosin Lakes, “we could offset much of the university’s carbon footprint in one fell swoop,” Richardson said. “Duke will likely also have thousands of tons of carbon credits to sell.”

Richardson said he and his team are already looking for other landowners, industries or businesses that would like to partner or invest in projects at similar sites.

He noted that spatial analysis by researchers at the Duke Wetland Center shows there are hundreds of thousands of additional acres of pocosin peatlands across eastern North Carolina and other southern coastal states that have been drained for agriculture or forestry, or abandoned.

Restoring these lands so they can be managed as productive carbon farms could provide a new source of revenue for landowners throughout the region and yield long-term environmental benefits above and beyond carbon storage.

“Rewetting these areas and restoring them as freshwater peatland bogs will raise the local water table and help keep salt water from intruding into neighboring agricultural lands, which is a big problem in a low-lying coastal area like this,” Richardson said. “Restoring the lands will also aid wildlife conservation for native or migratory species and create new opportunities for restricted hunting on some lands by creating better habitats for wild turkeys, quails and ducks.

Richardson will present a talk about the new Hyde County carbon farm and his team’s research on the carbon-storing potential of pocosin peatlands at the American Geophysical Union’s Fall Meeting in Washington, D.C., on Dec. 13.