The contamination doesn’t, however, stem from leaking coal ash ponds as many people feared after state officials tested wells near coal plants last year and detected potentially harmful levels of hexavalent chromium in the water. 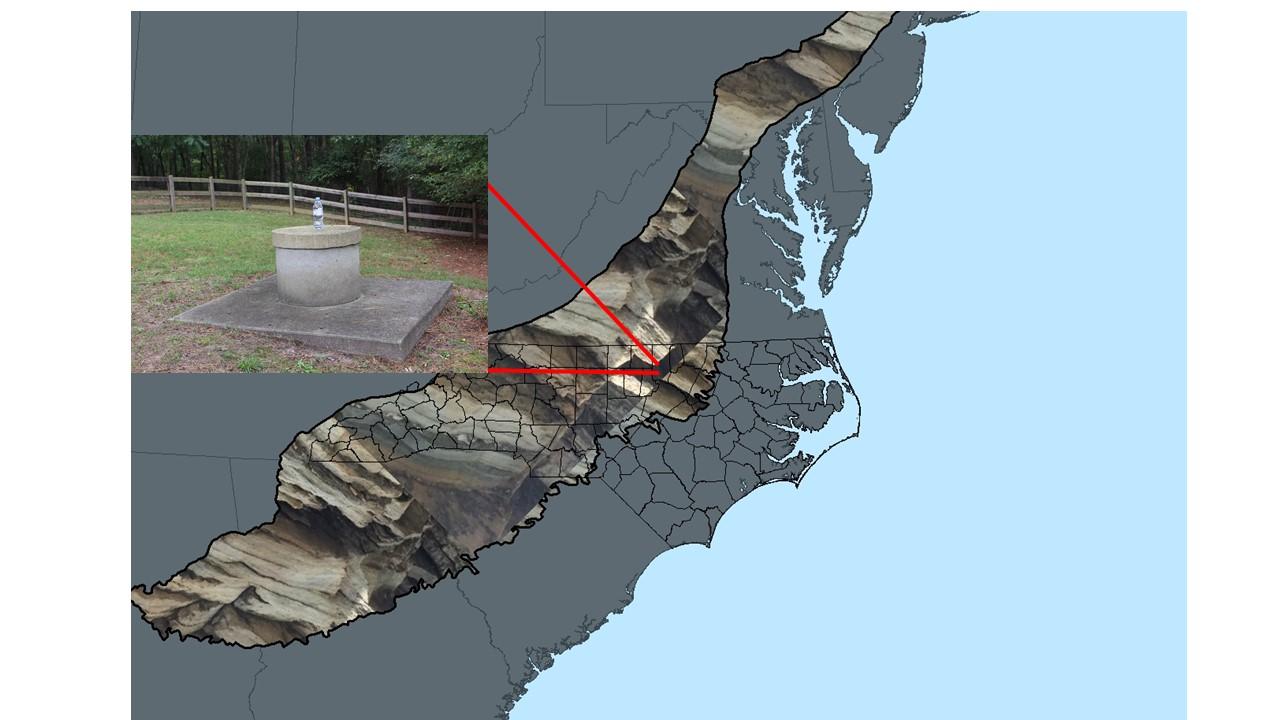 A map of the Piedmont geological formation, with inset photo of one of the water wells sampled in the new study. (Credit: Duke Univ.)

Instead, it’s caused by the natural leaching of mostly volcanic rocks in aquifers across the Piedmont region.

“About 90 percent of the wells we sampled had detectable levels of hexavalent chromium, and in many cases the contamination is well above recommended levels for safe drinking water. But our analysis clearly shows it is derived from natural sources, not coal ash,” said Avner Vengosh, professor of geochemistry and water quality at Duke’s Nicholas School of the Environment.

“This doesn’t mean it poses less of a threat,” Vengosh stressed. “If anything, because the contamination stems from water-rock interactions that are common across the Piedmont region, people in a much larger geographic area may be at risk. This is not limited only to wells near coal ash ponds.

“The bottom line is that we need to protect the health of North Carolinians from the naturally occurring threat of hexavalent chromium, while also protecting them from harmful contaminants such as arsenic and selenium, which our previous research has shown do derive from leaking coal ash ponds,” Vengosh said. “The impact of leaking coal ash ponds on water resources is still a major environmental issue.”

To conduct the new study, the researchers collected groundwater samples from 376 wells located both close to and far from coal ash ponds across the Piedmont region of central North Carolina. Using forensic geochemical tracers, they analyzed each sample for a wide range of inorganic chemicals, including hexavalent chromium.

The tracers, which were developed by Vengosh and his team, allowed the scientists to identify the geochemical fingerprints of contaminants in the groundwater and trace each contaminant back to its source.

“Our analysis showed that groundwater samples with high levels of hexavalent chromium have very different geochemical fingerprints than what we see in groundwater contaminated from leaking coal ash ponds,” Vengosh said.

“This, combined with the wide geographic distribution of samples containing elevated hexavalent chromium – regardless of proximity to a coal ash pond – points to the natural leaching of chromium from aquifer rocks in certain Piedmont geological formations,” he said.

Piedmont formations with volcanic rocks are common across the southeastern United States and other areas worldwide, Vengosh noted, so millions of people in regions outside North Carolina with similar aquifers may be exposed to hexavalent chromium without knowing it.

The Duke team published its findings October 26 in the peer-reviewed journal Environmental Science and Technology Letters.

In 2015, water-quality officials in North Carolina issued temporary “do not drink” recommendations to residents living near coal-burning plants after tests detected potentially harmful levels of hexavalent chromium in their well water samples. Because elevated levels of chromium typically occur in coal ash, many people assumed the contamination was linked to the coal ash ponds.

Vengosh’s team’s study is the first to show otherwise.

Funding came from the North Carolina Water Resources Research Institute and the Foundation for the Carolinas.