Peter M. Nicholas, T’64, philanthropist and visionary, died May 14 at his home in Boca Grande, Florida. He was 80 years old.

Pete, as he was known to friends and associates, graduated from Duke in 1964 with a degree in economics and received his MBA from the Wharton School of the University of Pennsylvania in 1968. In 1979, he co-founded Boston Scientific Corporation, a manufacturer of medical devices. Through his visionary leadership, Boston Scientific grew from a startup to the world’s largest medical device company dedicated to less-invasive medical therapies and procedures.

Nicholas, chairman emeritus of the Board of Trustees for Duke, served on the board from 1993 to 2005. He has served Duke in a variety of other capacities as well. He was a charter member and chair of the Board of Visitors for the Trinity College of Arts and Sciences, a reunion class chair, and a member of the board of the Duke University Health System.

But it was his dedication to the environment that changed the course of Duke history, and the trajectory of environmental education at Duke.

A $20 million gift and a vision from Pete and his wife, Ginny, to, in Pete’s words, "greatly expand its reach and influence in undertaking critical research, training future leaders, and informing the debate about issues that range from global warming to the quality of our air and water", established the Nicholas School of the Environment in 1995. At the time, their gift was the single-largest from an individual or couple in Duke's history.

According to Ken Hubbard, T’64, a member of the Nicholas School Board of Visitors and a fraternity brother and friend of Nicholas, while Pete’s business success is well known, where his environmental interest began is more of a mystery to him.

“We all know the remarkable story of his entrepreneurial and business success with a start-up, Boston Scientific, and beyond. But what I don’t know is what initially drove his deep drive to deal with environmental issues. I always assumed his service in NROTC and the US Navy influenced his love of the ocean and interests in environmental policy,” Hubbard said. “Pete brought a fresh voice as an advocate for environmental education and policy to the Trinity Board and to the Board of Trustees. He has been a solid friend and a strong and consistent thinker on environmental issues, well ahead of his peers.”

Norm Christensen, professor emeritus, who was Dean of the School of the Environment at the time of the naming gift, said that Peter was generous in many ways. 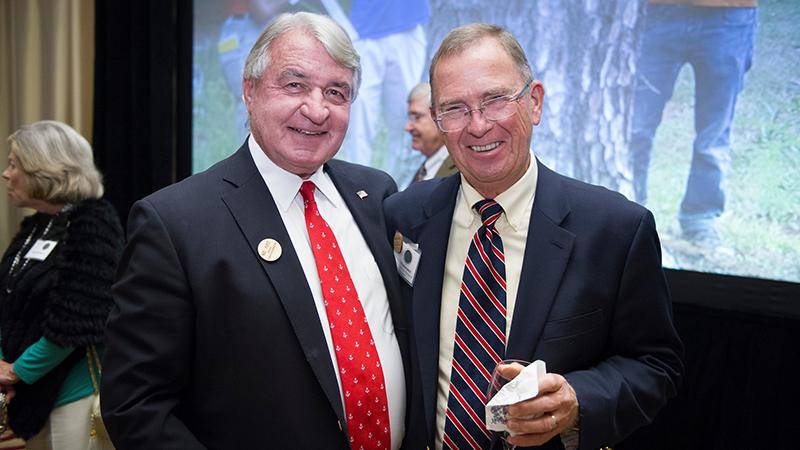 “Working with Pete Nicholas was one of the great pleasures of my time as dean of the Nicholas School,” Christensen said. “His gifts to the school were transforming, but I was also the beneficiary of his encouragement and wisdom.

“I remember especially his questions as he was considering the naming gift for the school,” Christensen said. “At a meeting in his Boston office, he thanked me for my leadership, but said he was interested in where the school would be when the two of us were gone. ‘Norm, tell me how the school is going to become an essential and enduring part of Duke’s identity’, he said. He pulled a copy of the classic business text, Built to Last, from his bookshelf. ‘Read this and come back with a plan that looks beyond your tenure as dean.’ I did and a month later returned with a much sharper vision for a Nicholas School of the Environment. He smiled, shook my hand, and said, ‘You got it’.”

Sally Kleberg, WC’66, a long-time member of the Nicholas School Board of Visitors recalled that Ginny was her sorority sister at Duke, while Pete was a fraternity brother of her future husband. “A generation later, our children were also at Duke together where Norm Christensen’s impact on JK Nicholas and my son, Ben Espy, helped spark their environmental interests. Pete and Ginny, with their shared philanthropy and love for Duke, dared to see how this concept could become the model for all other higher education institutions to wrestle with.  I am so proud their children continue to be actively engaged at guardians of the environment at Duke and carry on Pete’s legacy.” JK Nicholas has served several terms on the Board of Visitors of the Nicholas School.

“Pete Nicholas and the Nicholas family have left an indelible mark on Duke University and especially the Nicholas School,” said Toddi Steelman, Stanback Dean of the Nicholas School. “With great foresight and imagination, Pete encouraged and supported Duke to be bold in our vision for environmental leadership. In his memory, we continue to honor that vision as we aspire to even greater climate and environmental impact at a time when the planet is most in need.“