Between climate change, pollution, patchwork governance, escalating human use of marine resources and other stresses, the world’s oceans are in a sea of trouble.

The program was launched last year to spur innovative solutions to the problems facing marine environments by leveraging the talents and leadership of Duke faculty and students from many disciplines.

“Finding practical and scalable ways to address these issues is going to take expertise in ocean science, policy and business,” said Dan Vermeer, co-founder of Oceans@Duke and director of Fuqua School of Business' Center for Energy, Development and the Global Environment (EDGE). Duke has deep expertise in the first two areas, he says, but is still building strength in the latter. Oceans@Duke is intended to help bridge that gap.

“Our mission is to serve as a clearinghouse for new opportunities, as a facilitator for interdisciplinary research and thought leadership, and an amplifier to increase the scale and impact of our individual efforts and bring all the expertise we have to a new audience – the business and innovation sphere,” Vermeer said.

Led by a core group of 17 faculty members and six graduate students, the program is already making waves.

Hundreds of ocean stakeholders from Duke and beyond participated in four Oceans@Duke webinars this spring – one led by Pat Halpin on ocean mapping; one led by Lisa Campbell on conservation territories at sea; one led by Jason Somarelli on links between ocean and human health, and one led by Steve Roady on deep-sea mining. (Recordings of all webinars are archived at Oceans@Duke in case you missed them.)

Two upcoming webinars are also scheduled. On May 11, Meagan Dunphy-Daly will lead a presentation on oceans plastics pollution. On June 1, Vermeer and John Virdin, director of the ocean and coastal policy program at Duke’s Nicholas Institute for Environmental Policy Solutions and a co-founder of Oceans@Duke, will introduce their “Ocean 100” list of global influencers for ocean sustainability and discuss how to mobilize them into action.

The Ocean 100 project is a prime example of the type of innovative approach to facilitating the science-policy-business collaboration that Virdin and Vermeer hope to spur through the new initiative.

“By identifying the 100 companies with the largest economic impacts in the ocean sector, we discovered that almost half are oil and gas companies. Not only that, but the biggest of these companies account for most of the dollar activity but still don’t have much of a focus on sustainability,” Virdin said. “This creates a major opportunity for Oceans@Duke to engage these players in coming years.”

Vermeer plans to jumpstart engagement with these powerful companies through ongoing workshops this year and a summit on the blue economy that Oceans@Duke will host on campus in spring 2022.

Inspiring and training future oceans leaders will also be a major future focus, says Doug Nowacek, Repass-Rodgers University Distinguished Professor of Conservation Technology and also a co-founder of the new initiative. An Oceans@Duke Student Club was formed this spring, and he and his colleagues are actively seeking opportunities to facilitate new ocean-focused learning opportunities for students at Duke and beyond.

“Earlier this year, we were able to connect David McAdams, a game theorist at the Fuqua School of Business, with Meagan Dunphy-Daly at the Nicholas School to create a curriculum on marine plastics for K-12 students through the Duke Marine Lab’s Community Science Initiative,” Nowacek said. “We’re also looking into hosting a series of Oceans@Duke leadership conversations this fall, where we’ll bring in NOAA administrators and other top leaders to share their insights about the future of oceans with students.” 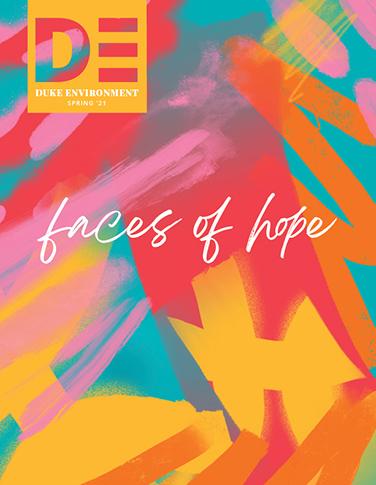